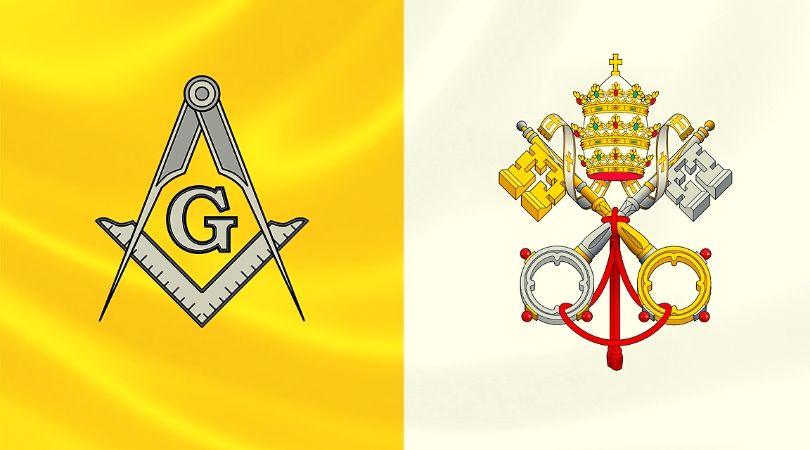 The masonic plan to replace catholicism with different religion

“What is the purpose of all this? To replace the Catholic religion and the Catholic Church with a new religion.” These words are contained in a great book by Massimo Viglione: 1861. Le due Italie. Identità nazionale, unificazione, guerra civile [1861: The Two Italys – National Identity, Unification, Civil War] (Ares, 2011).

This affirmation is found at the end of a chapter titled, “Freemasonry, Utopianism and Revolution,” in which the author demonstrates how, in the “Italian Revolution” (including the “Risorgimento” — the 19th century political and military movement to unite Italy), the Masonic lodge was decisive and above all was engaged as a way of opposing the Catholic Church, with the purpose of ultimately creating a new religion.

What religion? The Risorgimento’s religion of the “fatherland,” which was a new cult of the Italian people, as part of the more general cult of humanity, in which Man is the new god and “men” are made up of various peoples who together form “Humanity.”

With good reason, Viglione writes “god” in the lower-case and “Man” with a capital “M.” In the new religion worship is overturned, and it is Humanity that is now the divinity. But what we also need to reflect on is the universal scope of the war waged by the Italian Risorgimento, with fundamental external aid, against the Catholic Church. The battle to defeat and conquer Rome as the seat of the Pope did not only intend to resolve a national question and give Italy a capital. For the new humanitarian cult it meant defeating its age-old enemy: the Catholic Church.

Not by chance did Luigi Settembrini, an influential 19th-century Italian Mason, speak of “enemy Rome,” saying, “The new Italy and old Catholicism cannot remain together; we have made the papacy, we must transform it; and if Italy does not ‘de-pope’ herself and transform her religion, she has no reason to exist.” Settembrini’s plans were very clear. But how is it possible to ‘de-pope’ Italy and, along with Italy, the entire Catholic world?

The method was equally clear: to bring the attack not from the outside, but from within. Not following the path of the pagan persecutions, of the medieval heresies, of the Protestant wars, of the French Revolution, but rather to poison the Church internally, causing a tumor to grow within her that would lead to her death.

Risorgimento Freemasonry, aware of the historical failures faced by all those who wanted to attack the Church and Catholicism head on, set out to conquer the pope and the Catholic hierarchy. Viglione writes, “In short, it was a question of ideologically corrupting the young priests, because one day some of them would become bishops, and then, one day, among those bishops, one of them would end up becoming pope! And the pope can do everything in the Church, even provoke its destruction, according to their plans.”

This was a long-term plan (as stated in the Instruction for the Alta Vendita in 1817). It would require more than a century to realize, but it would ensure victory, corrupting the Church from within.

A fundamental part of realizing the plan is still putting Rome and Italy to death as visible seats of Catholicism.

Now it is very difficult to read, for example, a document like the Abu Dhabi Declaration, signed by the pope and the grand imam of Al-Azhar in February 2019, without thinking about what Viglione writes about the plans to conquer the Church from within. All the more so because Pope Francis is the darling of the Masons (who saluted the Abu Dhabi Declaration as a moment of historic shift for the Church, in a positive sense. In the same way, it is difficult to study the Second Vatican Council without experiencing disturbing reminiscences of the Masonic plans to infiltrate the Catholic hierarchy.

The Risorgimento produced strong dogmas, first and foremost the one that said that the only way to be an Italian patriot was to support the Risorgimento. In the same way, the narrative imposed by the Risorgimento ostracized those who wanted to distance themselves from these dogmas and tell another story or talk about the misdeeds of the Risorgimento. And something very similar is happening today, no longer just in Italy but on a planetary level, with the imposition of new dogmas that follow the line of relativism, humanitarianism, environmentalism and the simultaneous marginalization of those who present counter-information or counter-history.

The scenarios change, but the substance is confirmed: corrupting Christian humanism, transforming it into ideological humanitarianism so as to put man in the place of God. And all this is done, not in opposition to the Catholic Church, but rather with the active support of the Church herself, now emptied of her main contents, filled with new dogmas that please the world and extremely active in making herself an interpreter of the new humanitarian word.

Observing what we see today, another point is confirmed: a fundamental part of realizing the plan is still putting Rome and Italy to death as visible seats of Catholicism. And in order to do this, it is necessary to inject artificial values and ideals into the Italians, ideas constructed elsewhere that have never been part of our cultural identity.

Great attention is therefore given to declaring that our nation is marginal and of little importance on the geopolitical chessboard. In order to construct a “New World” today, just as in the past, it is said that we need a “New Italy.” And the builders (or, better said, the bricklayers) know this well.

First published by Aldo Maria Valli at his blog, Duc in altum.