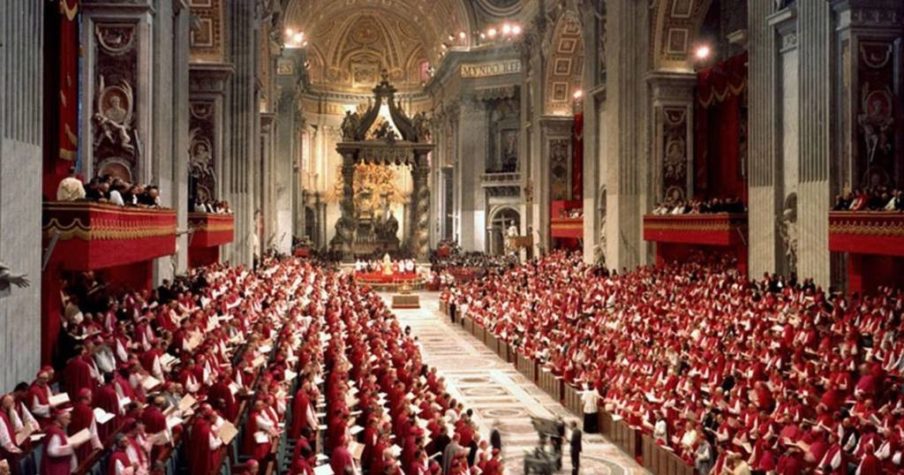 The criticism of the Council is flourishing

“The Council is the magisterium of the Church. Either you are with the Church and therefore you follow the Council, and if you do not follow the Council or you interpret it in your own way, as you wish, you are not with the Church.” This statement of Pope Francis was made during the audience of 30 January 2021 to the members of the Catechetical Office of the Italian episcopal conference, upon the celebration of its sixtieth anniversary.

Pope Bergoglio rarely quotes Vatican II[1]: he doesn’t have to prove his loyalty to the Council, say some humorously, because he is the living incarnation of the Council and of its spirit. He is the culmination of the Council. But, in fact, he is not at the origin of the concept of submission to Vatican II. We should, indeed, remember the signed declaration Mgr Lefebvre was ask to make and sign, and later on the founders of “official” traditional institutes, agreeing to the following: “We declare that we accept the teachings of the Magisterium of the Church in the substance of faith and moral, including those of the Vatican II Council.” It is true that this declaration further added: “adhering to each doctrinal affirmation in the required degree,” which in the end, allowed all the possible restrictions of conscience.

But who are these mean people who speak ill of Vatican II?

In the interview Pope Francis had given in the beginning of his pontificate to a variety of Jesuit reviews in August 2013, the pope strongly stated: “Vatican II was a re-reading of the Gospel in light of contemporary culture,” says the pope. “Vatican II produced a renewal movement that simply comes from the same Gospel. Its fruits are enormous. Just recall the liturgy. The work of liturgical reform has been a service to the people as a re-reading of the Gospel from a concrete historical situation. Yes, there are hermeneutics of continuity and discontinuity, but one thing is clear: the dynamic of reading the Gospel, actualizing its message for today—which was typical of Vatican II—is absolutely irreversible.”

The allusion to the “hermeneutics of continuity and discontinuity” targeted those who found refuge with Benedict XVI behind the fragile barrier of “the hermeneutic of renewal in the continuity” (Address to the Roman Curia on 22 December 2005).

But, who is the target now in the address of 30 January last, that we quoted above? On that day, the pope turned his attention to a body of the Italian Conference of Bishops. As it happens, a powerful progressive lobby in the Italian Conference of Bishops is all the more active today that the pontificate leans towards its own goals and the group intends to secure the positions already won over. Its accession to key posts in the Curia, in the last nominations, proves it. In both conciliar liturgy and in conciliar doctrine, Francis is regularly alerted by his entourage feeding him this narrative: “Be aware! The supporters of the old mass and criticism of the Council are lying in ambush!”

Is this paranoia from progressive forces who like to scare themselves, when the danger has  actually become quite inexistent? In fact, they might have good reasons to still fear the virus of the criticism of the Council, now more than ever contagious. Because, to built on the epidemiological metaphor, the virus in question has mutated and is stronger than ever. During Benedict XVI, many had placed much hope in his “hermeneutic of renewal and continuity,” an hermeneutic itself subjected by each person to the hermeneutic that suited him. It all resulted in a mentoring network of the type of a “union of conservatives”, between classic and traditional, which had brought them closer, especially in Italy. At the time, observers like Sandro Magister had noticed that the Motu proprio Summorum pontificum was leading them to a common path. The famous “mutual enrichment”, which de facto played in favor of the “extraordinary” form by normalizing it, also played a role on a theoretical point of view: the criticism of the Council gained its rightful place too.

Came 2013, with the chock of the resignation of Benedict and of the election of Francis, which contributed to bringing back the reflection, from the effects – Bergoglism – to the causes – Vatican II. In other words, a good number of Ratzingerians have gone from criticizing Pope Francis to criticizing Vatican II: the evolution of Mgr Carlo Maria Viganò is a particularly good example. Furthermore, the trauma of 2013 has contributed to highlighting the continuity between all the popes of Vatican II: the declaration of Abu Dhabi, signed by Pope Francis, has an obvious relation to the successive Assisi meetings presided by John Paul II and Benedict XVI; and originally, what happened in Assisi or in Abu Dhabi would not have taken place without the “respect” Nostra æstate grants to non-Christian religions.

It should come as no surprise then, that the Ratzinguerian blog of vaticanist Sandro Magister, originally close to Cardinal Ruini, has dedicated a large column to the debate on the Vatican II council, same as the blogs of Marco Tosatti and Aldo Maria Valli?

It happens Aldo Maria Valli had just published a book, a couple of weeks before the intervention of the pope we mentioned earlier, dedicated to the criticism of the Council[2]. Can we say that it is this book, a true source of exasperation for his entourage, that the pope was thinking about in his address? For, Valli is not a marginal author. A journalist specialized in religious issues, he worked and maybe still does for reviews like the Studi Cattolici, Il Regno, for the television networks (TG3 nazionale, TG1, in the broadcasted news of the main Italian public television network Rai).

His book is a reunion of authors quite different from each other, but who all practically have strong reservations about the last council: Enrico Radaelli, who in short took over the work of Romano Amerio; Eric Sammons; Fr. Serafino Lanzetta, who teaches at the Catholic university of Lugano; Mgr Guido Pozzo, former president of the Commission Ecclesia Dei; Cardinal Zen; Fr. Alberto Strumia; Mgr Schneider; Giovanni Formicola, who writes in Cultural & Identità; Mgr Viganò; Roberto de Mattei, from Corrispondenza romana; Fr. Giovanni Cavalcoli, a Dominican.

Fr. Cavalcolli in the piece he wrote explains, for example, that the pastoral results of the Council can be debated, but that its doctrine must be received. On the contrary, Eric Sammons believes his duty to strongly contest this Council as such, whereas in the past he used to take its defense. Fr. Strumia recognizes that Vatican II has many defects, but that we should not make it a scapegoat. Mgr Pozzo stands on the hermeneutic of renewal in the continuity, a view with which Fr. Lanzetta disagrees as he reminds us of the principle: in claris non fit interpretatio. He writes:“To entrust the hermeneutic, to resolve the problem of the continuity is a problem in itself” (p.17). And Mgr Viganò insists saying that resorting to the hermeneutic, “something that has never been necessary for any other council”, is due to the heterogeneity of Vatican II in relation to the previous councils.

A strong theme of the various contributions is logically the “pastoral” character of Vatican II. “The pastorality included an absence of condemnation and a non-definition of the faith, and instead, offered a new way of teaching for the present time. This new way has had influences on the doctrine and vice-versa. This problem is still felt with all its virulence today when there is a preference for leaving doctrine aside for pastoral motives, but this cannot be done without in fact teaching another – different – doctrine.” (S. Lanzetta, p.19).

But how can we get out of this situation? Cardinal Brandmüller had suggested we should “historicize” Vatican II and put it behind us, avoiding any direct magisterial correction: the declaration Nostra ætate, for example, being reduced to a historic public stance by the publication of the instruction Dominus Jesus. This does not exactly resolve the issue, because Nostra ætate  remains a reference in itself. Mgr Viganò suggests a magisterial rejection of all the corpus of conciliar documents, from the moment that defective parts affects the whole. In a midway position, Mgr Schneider deems possible the magisterial correction of the ambiguous expressions and doctrines which would allow for the teaching founded on truly traditional grounds to be retained.

This debate could be deemed insignificant under the pretext it takes place between people considered as marginal. But we must resist this judgment, because in an ideological context, such as the one of the Church since Vatican II, any voices of discord receives immediately the label of marginality. A judgement that the Church can worsen on her own with awkward communications and expressions (we recall the criticism, though well argued, of Mgr Lefebvre against the new mass, yet considered with disdain, under the pretext that he called the Novus Ordo, the“mass of Luther”).

In addition, it should be noted that all criticism towards dubious or erroneous items of Vatican II can only necessarily lead to reflexions concerning the “exit” from this situation. As a result, rather than considering these debates on the “exit” of the Council as derisory, because they are led by prelates who have no power to turn them into a modus operandi, it is better to consider that they participate in an increase of the criticism towards the Council within Catholicism, a criticism which will continue to flourish from the exasperation of the tensions nearer to the end of the pontificate. So that if the criticism of Vatican II, at the time of an apparent Wojtylan renewal, could appear insignificant (it timidly based itself on the hushed reformism of The Ratzinger report); it is now, openly, part of the landscape at a time when we see much Bergoglian “nonsense”.