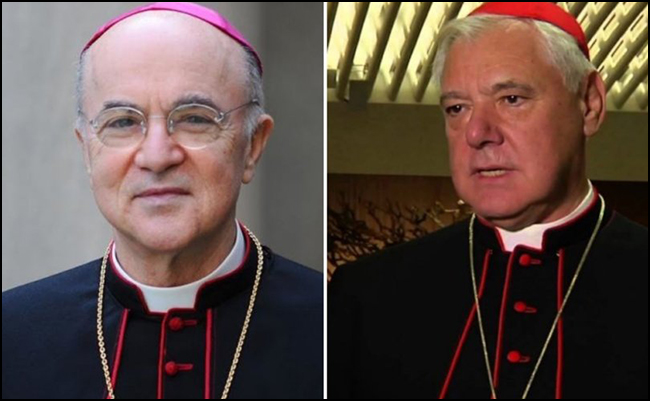 Vigano comments on those considered by the “globalist Sanhedrin” to be heretics, “unworthy to ask questions about the new dogmas of the health religion defined ex cathedra by the experts in the pay of BigPharma”.

After Cardinal Gerhard Müller gave Catholic activist Alexander Tschugguel a thoughtful and good interview concerning the coronavirus lockdowns, vaccine mandates, and especially the dangerous and anti-democratic agenda of the Great Reset, he came under strong attacks in Germany. Both state and faith leaders rebuked him for purportedly spreading “conspiracy theories” and even “anti-semitic codes,” because he mentioned George Soros as one of the globalists whose worldview he is rejecting.

LifeSite reached out to Archbishop Carlo Maria Viganò, whose strong position against the Great Reset is well-known, asking him whether he would like to comment on the strong reaction against Cardinal Müller’s reasonable critic of the current political developments which seem to use the health crisis in order to establish an anti-democratic, globalist order.

We thank Archbishop Viganò for his immediate response and help.

The virologist who affirms the ineffectiveness of the vaccine and highlights the serious conflicts of interest in the officials responsible for the authorization of drugs or therapies; the member of the Parliament who objects to the advisability of imposing lockdowns after they have proved useless to contain the pandemic and disastrous for the nation’s economy; the jurist who criticizes the rules imposed by the Government in violation of the Constitution; the parish priest who from the pulpit questions the morality of an experimental serum produced with abortive fetuses; the intellectual who points out how the criminal plan of the Great Reset promoted by the World Economic Forum and the United Nations Agenda 2030 find timely and disturbing realization precisely following that pandemic emergency hoped for since 2009 by Jacques Attali in the French weekly L’Express are considered by the globalist Sanhedrin as heretics, unworthy to ask questions about the new dogmas of the health religion defined ex cathedra by the experts in the pay of BigPharma. We can imagine what honesty and impartiality can be ensured by controllers paid by the controlled. am not surprised that the truth provokes mixed reactions in those who propagate the error that opposes it. The reactions of the Pharisees to the words of Our Lord – starting with the theatrical gestures of Caiaphas to the proclamation of His divinity by the Messiah – always betray the anger of liars and people in bad faith in the face of the affirmation of truth and intellectual honesty. And this indignation as forced as it is unmotivated, having no arguments to counter the refutation, often moves to the interlocutor, in an attempt to ridicule him, make him pass for mad or a dangerous criminal: the examples we have been able to witness to those who have put in any of the cornerstones of the official narrative on Covid are the confirmation of an intolerant attitude on the part of those who lie, and at the same time the accusation of intolerance towards those who limit themselves to saying a clear evidence of truth.

There is no point in citing the writings and the statements of the exponents of the deep state in which they brazenly confess their criminal project. Let’s take for example the quote from Jacques Attali:

«History teaches us that humanity evolves significantly only when it is really afraid: then it initially develops defense mechanisms; sometimes intolerable (of scapegoats and totalitarianisms); sometimes useless (of distraction); sometimes effective (therapies that deny all previous moral principles if necessary). Then, once the crisis is over, fear transforms these mechanisms to make them compatible with individual freedom and enroll them in a democratic health policy» (https://scenarieconomici.it/jacques-attali-una-piccola-pandemia-permettera- to-establish-a-world-government /).

These words were spoken in 2009, in the imminence of the swine flu for which the WHO was then denounced. In them we can have confirmation of an exact picture of the methods of managing the health emergency, indeed even of the planning of the emergency itself, with the provision of possible responses from citizens. Just a few days ago Attali was interviewed without wearing a mask by two prone journalists, whom he scolded because they were holding the mask under their noses. The anecdote – which you can find in a video on the Internet – is proven proof of the absurdity of the pandemic narrative, which applies to the subjects and slaves of the system, but not to those in charge. Biden, Johnson, Merkel, Draghi, Bergoglio and all the “greats of the world” flaunt contempt for the masses, imposing on them absurd rules that they are the first to break precisely to demonstrate that adherence to this pandemic cult requires fideistic assent, and not it has nothing scientific.

His Eminence Müller, who is an intellectually honest person, said things already denounced by Cardinal Burke, by Msgr. Schneider and myself, among others; things that Klaus Schwab, George Soros, Bill Gates and all the followers of the Great Reset have always publicly declared, even producing official documents and printing books in which they explain in detail the different scenarios that can be predicted, from pandemic to climatic emergency. And the words of the Cardinal are the confirmation that his name affixed to my Appeal for the Church and for the world of last May 2020 was meditated and desired. I thank Eminence of him for that gesture in some respects courageous.

And I regret that in Germany the mainstream media have accused Cardinal Müller of anti-Semitism, for the simple fact that George Soros and Klaus Schwab have Jewish origins, while they have scrupulously avoided entering into the merits of the matter. Yet similar denunciations against the globalist elite and in particular against Schwab, Gates, Soros, the Rothschilds and the Rockefellers are made by orthodox rabbis and Jews who survived the Nazi concentration camps: are they anti-Semites too? But, again: asking reasonable questions to those who are biased is useless. As in Aesop’s tale, the wolf at the top of the waterway believes he has the right not to let the water be polluted by the lamb downstream.

I can imagine that, for a Cardinal who was also Prefect of the Congregation of the Doctrine of the Faith, it is somehow challenging and not so easy to take a stand on an issue that sees Bergoglio on the opposite side of propagating Pfizer vaccines and supporting the green economy and inclusive capitalism with the Rothschilds and Rockefellers. But I also think that, if His Eminence had the honesty to denounce the anti-human conspiracy of the New World Order and the interference of the billionaires Gates and Soros in the destiny of nations based on the evidence and the consent of their statements, he will recognize with equal clarity of analysis the same consent to the globalist ideology in the tenant of Santa Marta, who just recently blessed an inter-religious park in Argentina and approved the Foundation Fratelli tutti and its “holistic training” for dialogue with religions. If the interference of Soros and Gates in the government of nations is evident, Bergoglio’s responsibility in giving dignity and legitimacy to the accomplices of the WEF and the UN, to their plans and to those who cooperate with them is undeniable; because ecumenism, the divinization of Mother Earth, the “Amazonian” dimension of the Church, the synodal path, the transhumanism of the Foundation for Artificial Intelligence and all the unfortunate innovations of this pontificate are perfectly consistent with this framework, are instrumental to it and pursue the same end, namely the establishment of the Religion of Humanity which is the necessary goal of the New World Order.

If the health emergency has caused incalculable damage, it has nevertheless the merit of having opened the eyes of so many blind people, of having healed so many deaf and dumb, who return to listen and speak. This grace must be an opportunity for all of us to be able to evaluate with a supernatural gaze what is happening before our eyes, to perceive the inspiring principles and the undeclared purposes, to denounce those responsible and to warn the simple, who rightly expect let their Pastors be the ones to give them healthy indications, and not to push them into the abyss. And to understand how true are the words of the Lord: «Without me you can do nothing» (Jn 15: 5).