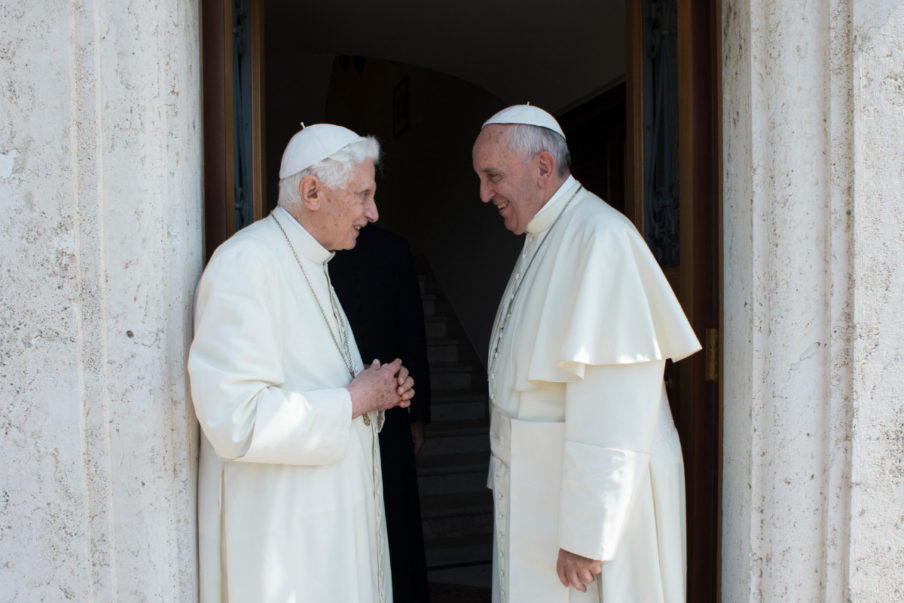 The Resignation of Benedict XVI, the 2013 Conclave, the Election of Francis and the St. Gallen Mafia

Dear friends of Duc in altum, recently I was interviewed by databaseitalia.it. It was a conversation that centered above all on the resignation of Benedict XVI, the conclave of 2013, the election of Francis, and the role of the St. Gallen Mafia.

After the IOR [Vatican Bank] was thrown out of Swift [the international banking system], now it has happened to the Russian banks too. The objectives of those who worked to weaken Benedict XVI and elect Francis coincide with the objectives of the promoters of the New World Order.

What follows is my interview with the journalist Aldo Maria Valli, who is very close to Archbishop Carlo Maria Viganò. The questions that I ask are the fruit of my reflections after reading a recent interview of Valli with Viganò himself a few days ago (here).

Armando Savini: Archbishop Viganò is the first bishop to propose the hypothesis of the nullity of the election of Bergoglio, nullity which, if proven, could trigger the greatest reset in Church history, “a reset that would providentially bring us back to the status quo ante, with a College of Cardinals composed only of those Cardinals who were appointed up to the time of Benedict XVI.” For two years now, some canonists have questioned the validity of Bergoglio’s election, demonstrating how Benedict XVI is still the legitimate pope, since he never expressly renounced the munus as required by the Code of Canon Law, but simply declared an impeded see, as has been well-documented by Andrea Cionci (here). Do you believe that Archbishop Viganò is referring to this hypothesis, when he writes that “it is necessary to shed light on the abdication of Benedict XVI”?

Aldo Maria Valli: Certain canonists who have studied the text of the resignation of Benedict XVI emphasize that the pope distinguishes between the munus (we could say being pope) and the ministerium (doing what the pope does). I do not want to go into this distinction, which, moreover not even the experts agree on. In any case, I observe that Benedict XVI has always said that he renounced the pontificate and that he himself invited the calling of a conclave to elect his successor. I do not see any room for being able to speak of a defect of his will, not to mention that after the resignation Ratzinger has always recognized Bergoglio as the legitimate reigning pontiff. All this does not take away from the fact that there ought to be an investigation of the role played by the so-called Saint Gallen Mafia in objectively putting Benedict XVI in difficulty, to the point of creating the conditions for the resignation. In my book Uno sguardo nella notte. Ripensando Benedetto XVI (Chorabooks, 2018) I show how the papacy of Joseph Ratzinger was subjected to systematic attacks, in a crescendo of aggression aimed at putting the pope in a corner and presenting him as indefensible before world public opinion. According to Archbishop Viganò (and I agree with him), this action, by what the archbishop calls the deep church, is clearly tied to the maneuvers of the deep state: everything takes place within a framework that is configured as an authentic global coup. The proof is that the objectives of those who worked to weaken Benedict XVI and elect Francis coincide with the objectives of the promoters of the New World Order, and the same can be said for the means that were utilized. At first glance, it may seem impertinent to connect the election of Francis with, for example, the demonstrations in the Maidan Square in Kiev. But in reality, it can be verified that these phenomena run in the same direction, with a script that apparently has a comprehensive vision of reality. I also observe that the measures adopted against the Vatican by means of excluding the IOR [Vatican Bank] from the SWIFT system shortly before the resignation of Benedict XVI (an action that made all payments by the Vatican impossible and placed the Holy See, practically speaking, on the same level as a terrorist state, foreshadowing its economic ruin) coincides with the measures now taken against Russian banks: it is the same time of blackmail interference.

The question is: were the means used to oust Benedict XVI and make him step down such that they made his resignation invalid and thus, as a result, was the conclave of 2013 also invalid? This is what the efforts of specialists who are determined to work to bring clarity ought to focus on.

AS: Regarding possible electoral fraud, Archbishop Viganò spoke of a null conclave. Up until now, the Holy See has never rejected the accusations made by one of Bergoglio’s great electors, Cardinal Danneels, according to which the cardinals of the “Saint Gallen mafia” – as he himself called it – were present at the [2013] conclave “in the spirit of Saint Gallen,” that is, aimed at bringing to completion their destabilizing plans which were constructed during their secret meetings. If this accusation were to be confirmed, we could find ourselves with excommunicated cardinals (electors), who would have invalidly elected a cardinal who himself would also be excommunicated, since he belonged to the same mafia that would have placed him on the throne of Peter. Is this, in your opinion, a likely scenario? Could Bergoglio be fully defined as an “inflicted pope”?

AMV: In the Apostolic Constitution Universi Dominici Gregis (issued by John Paul II on 22 February 1996 concerning the vacancy of the Apostolic See and the election of the Roman Pontiff), one reads that any pre-electoral agreement among the cardinals is forbidden. Furthermore, the procedures to be followed in the voting are spelled out in minute detail. Now, we know from various sources (which have never been denied by the Holy See) that the election of Cardinal Bergoglio is said to have taken place on the evening of 13 March 2013 following a third scrutiny [ballot].

In this regard, the Constitution (n. 68) states: “If the number of ballots does not correspond to the number of electors, the ballots must all be burned and a second vote taken at once; if however their number does correspond to the number of electors, the opening of the ballots then takes place in the following manner.” And in n. 69 we read: “If during the opening of the ballots the Scrutineers should discover two ballots folded in such a way that they appear to have been completed by one elector, if these ballots bear the same name they are counted as one vote; if however they bear two different names, neither vote will be valid; however, in neither of the two cases is the voting session annulled.” Thus, in the first case [the wrong number of ballots], they should have proceeded to the third scrutiny. If, on the other hand, it was the second situation [two ballots folded together], they should not have proceeded to the third scrutiny. In both cases, there was a violation of the norms.

Someone will say, this is simply a procedural flaw. But Universi Dominici Gregis n. 76 specifies: “Should the election take place in a way other than that prescribed in the present Constitution, or should the conditions laid down here not be observed, the election is for this very reason null and void, without any need for a declaration on the matter; consequently, it confers no right on the one elected.” Thus, either the Vatican denies that there were irregularities, or else, if it does not, we may think that the election of Francis was invalid or at least ask that it be investigated. And this would be so even if it were shown that the Saint Gallen Mafia worked to guide the votes of the cardinals towards one candidate.

The Apostolic Constitution, in fact, speaks clearly: “I likewise forbid anyone, even if he is a Cardinal, during the Pope’s lifetime and without having consulted him, to make plans concerning the election of his successor, or to promise votes, or to make decisions in this regard in private gatherings” (n. 79). And it continues: “The Cardinal electors shall further abstain from any form of pact, agreement, promise or other commitment of any kind which could oblige them to give or deny their vote to a person or persons. If this were in fact done, even under oath, I decree that such a commitment shall be null and void and that no one shall be bound to observe it; and I hereby impose the penalty of excommunication latae sententiae upon those who violate this prohibition. It is not my intention however to forbid, during the period in which the See is vacant, the exchange of views concerning the election” (n. 81). This, therefore, is the second front on which an investigation is necessary: were there real agreements made?

The failure of Bergoglio’s pontificate is before the eyes of all to see, and it is now even admitted “by the left.” A recent memorandum that was circulated among the members of the College of Cardinals (signed with the pseudonym Demos) says so clearly. But if the invalidity of the election of Francis was revealed (either due to a procedural defect or because there were agreements among the cardinals) there would be no need to examine the failure in detail.

AS: In Il mistero del male. Benedetto XVI e la fine dei tempi [The Mystery of Evil: Benedict XVI and the End Times], Giorgio Agamben wrote: “The abdication cannot fail to evoke in this perspective something like a discessio, a separation of the Ecclesia decora [honorable Church] from the Ecclesia fusca [dark Church]; and yet Benedict XVI knows that this can and must happen only at the moment of the Second Coming of Christ, which is precisely what the bi-partition of the Church, acting as katechon, seems destined to delay.” In the book-interview Benedetto XVI. Una vita, Peter Seewald, referring to Agamben’s book, asks Benedict XVI if “the true reason for your resignation was the desire to awaken eschatological awareness,” “a prefiguration of the separation of “Babylon” from “Jerusalem” in the Church.” The response of Benedict XVI seems to confirm the question. According to the prophecies of Garabandal, Benedict XVI would be the last pope, or, at least, “the last to represent the figure of the pope as we have known him up to now,” using the words of Seewald in Last Conversations. Here too Ratzinger’s response was clear: “Everything is possible.” Archbishop Viganò, with regard to the great reset and the psycho-pandemic, has said that they prefigure the reign of the Antichrist. If Benedict XVI closes one era and opens another, have we perhaps come to the end times? And is this perhaps the time in which the katechon is taken out of the way in order for the Lawless One to appear?

AMV: I do not feel qualified to give an answer. On the other hand, not even scholars have reached unanimous conclusions on such complex questions. I limit myself to observing that if Benedict XVI stepped aside in order to make room for a more energetic pope who was capable of governing, Ratzinger’s project has also failed. The Bergoglio management has been disastrous in all respects. And not only this: with Bergoglio the Church has become a sort of sycophant of the United Nations and all the other centers of thought and action committed to imposing the New World Order. The “psycho-pandemic” affair was, in this respect, extremely revealing. These are facts; this is now history. Paraphrasing the famous saying, “There will also be a judge in Berlin,” I continue to hope and pray that there will be a witness in the Vatican. A cardinal worthy of the name, a Monsignor who has a spark of conscience. Archbishop Viganò has done and continues to do a lot: but we need to prevent him from becoming isolated and discredited. He is perhaps the last point of reference we have left.