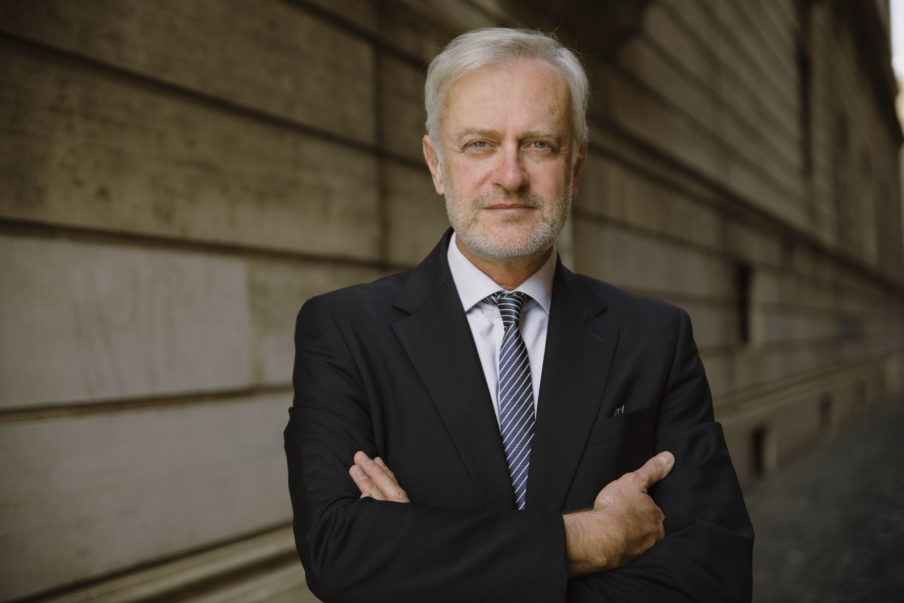 An interview with Aldo Maria Valli

Dear friends of Duc in altum, the website Church Militant offers in English my interview with the newspaper Libero.

Here is the text.

An interview with Aldo Maria Valli

Aldo Maria Valli is one of the Italian journalists who helped publish the testimony of Archbishop Carlo Maria Viganò in August 2018.

While an epochal clash is unfolding between the traditionalist and progressivist wings of the Church, Aldo Maria Valli, former Vatican journalist for RAI (Italian national public broadcasting), has recently published a book, L’ultima battaglia (Fede & Cultura) [The Final Battle], which is both a dystopian novel as well as a disturbing photograph of the present situation in the Vatican.

Dear friends of Duc in altum, I was interviewed by the daily newspaper Libero. In my conversation with Gianluca Veneziani we addressed many interesting topics!

In the Church that you describe in your novel, it is prohibited to make the Sign of the Cross, to speak of Heaven, to pray to the Blessed Mother and to call oneself Catholic.

It is a reality that we already have right before our eyes. Today we have a reigning pontiff who uses the same language as the world and proposes the same theses as dominant secularist thought. On more than one public occasion the pope has avoided giving a blessing using the Trinitarian formula in order not to offend the sensibilities of non-believers and those of other faiths. All this is in obvious contrast to the evangelical command to announce the message of salvation from the rooftops. It is a betrayal of the faith.

In your book you imagine the birth of an Islamic-Christian Europe and Asia. Are these continents at risk of an ethnic and religious replacement?

Definitely yes. These two processes go hand in hand. If we take into account the demographic aspects of the present situation, we see what we are up against. “Dialogue” seems to be the new prevailing dogma. But what is the goal of such dialogue? In this as in other things we ought to keep in mind the command of Jesus: “Go into the whole world, and preach the gospel to every creature.” But instead, dialogue has come to mean the progressive stripping of our religious and cultural heritage.

In your book, priests are able to be married, and they can also marry other men. Does not considering celibacy indispensable any more mean opening the door to marital unions between homosexual priests?

This seems to be the path which a certain modernist Church intends to follow. But this is an act of suicide. We know this because of the example of the Protestant churches: they have bowed to the world, they have identified themselves with the dominant secular thought, and what is the result? They are irrelevant. And it is truly incredible that, even though we already have this negative example, a certain part of the Catholic Church wants to undertake this path of self-dissolution.

Ratzinger has expressed himself in favor of the celibacy of priests, defining it as “indispensable.” In your judgment, is he taking on the role of an antipope?

Whether he wanted it or not, and he certainly didn’t want it, he is now identified as an antipope by some Catholics. It was inevitable. The presence of two popes brings with it a series of devastating consequences. What is a pope emeritus really? What role does he have? On the specific question of the celibacy of priests, as on many other questions, I am in agreement with Benedict XVI, but I believe that the presence of a pope emeritus is a disaster for the Church. It gives rise to contrasts, misunderstandings, oppositions.

The text of Benedict XVI has turned into a detective story. From the letters posted [on Twitter] by Cdl. Sarah we see that Ratzinger knew about the form in which the book would be published. And yet the secretary of the pope emeritus asked that Benedict’s name be removed from the cover of the book. Is this an attempt to pass Ratzinger off as a senile old man?

It seems evident to me that Cdl. Sarah behaved correctly. On the other hand, what interest would he have had in deceiving the pope emeritus? The withdrawal of Benedict’s signature evidently happened after strong pressure coming from Santa Marta [Bergoglio’s residence].

The agenda of the progressive spin machine is clear: to demonstrate that the pope emeritus can be manipulated and to discredit Sarah as a possible future candidate for the papacy. Unfortunately, I would say that the operation was successful.

Is the case really closed, as Bergoglio said to Repubblica, or is there an irremediable rift between Francis and Benedict XVI?

The case is not closed and cannot be closed. I believe that in general, the discussion will move away from this specific case to addressing the co-existence of two popes, which has proven to be unmanageable. To the outside, the Vatican presents two popes who live in love and harmony, but it is not so, because they have two completely different [theological] profiles and thus we will always be exposed to an incurable gap. To say nothing of the aberration of a pope having [the atheist journalist Eugenio] Scalfari as his spokesman.

The German Church is about to begin the “synodal way” that will discuss priestly celibacy, the female diaconate and Communion for the divorced and remarried. Five-hundred years after Luther, is a new desire for schism coming from Germany?

Germany is playing a central role in the process of the self-destruction of the Catholic Church. Unfortunately, the 500th anniversary of the Lutheran reform was used to promote a deadly embrace with Protestantism. As in the case of other talisman words like “dialogue” and “discernment,” the word “ecumenism” is being used today to liquidate the Catholic Church.

You began to manifest perplexity about Bergoglio’s Magisterium after the 2016 encyclical Amoris Laetitia. Then you made a courageous choice — to publish the testimony of former nuncio Abp. Carlo Maria Viganò on the sexual scandals and pedophilia in the Church. What were the consequences for you for having dared, as a Vatican journalist, to “sing” in opposition to the choir that worships Bergoglio?

I experienced an interior struggle on both the human and professional level. But the choice to believe Abp. Viganò and to publish his report gave me much serenity in the end. I felt that I was on the right side. And even if I am no longer the Vatican journalist for RAI, I am content to have moved on. I took that step in freedom.

In another one of your books, Come la Chiesa finì [How The Church Ended], you tell the story of the end of the Church brought about by a series of popes named Francis. Is this another prophecy?

I have the clear impression that a part of the Church, including her top leadership, is working to arrive at the end of Christianity, or at least to arrive at a watered-down Christianity that is reduced to mere sentimentalism. Under the aegis of “pastoral choice,” doctrine is being destroyed, and it is clear that without doctrine there can be no authentic pastoral practice. We are faced with Church leadership that is working to liquidate the Church and transform her into something else, perhaps into a crutch of globalism.

In general, what is the biggest objection to make against Bergoglio?

In two words I think that Francis has introduced relativism into the Magisterium, by means of morality done case-by-case, which is the mortal enemy of Catholic thought, and the idea that in the end, all faiths are the same. What’s more, he has done this through the use of ambiguity, which makes the attack even more insidious.”

Originally published in Libero and at Aldo Maria Valli’s blog.