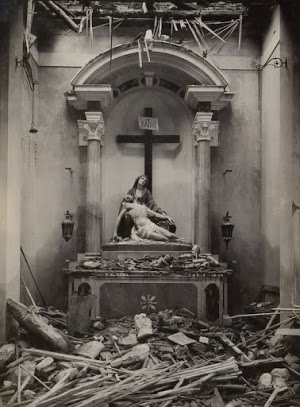 We have known for decades that the Church is in crisis. However, in recent years and, above all, in the past few months, in my opinion we are witnessing the manifestation of omens that indicate the imminence of the final outcome. The crisis is terminal, that is, irreversible. There is no way to turn back. Without a direct divine intervention, the Catholic Church will disappear in the next decade, transformed into a religious multinational, disfigured in its original character and transformed into a furious persecutor of the few Catholics who remain faithful to the depositum fidei.

When Pope Francis revealed Laetitia’s love affairs to us a few years ago [editor’s note: a sarcastic reference to Amoris Laetitia], we began to see that the question was no longer reduced to Latin or the use of guitars in the liturgy. Doctrine was being undermined.

In recent days we have witnessed the comic developments caused by the declaration of the Congregation for the Doctrine of the Faith, which denies the possibility of giving blessings to homosexual couples, a matter that for a normal Catholic who has learned the catechism is an obvious truth. Well, what should have been an almost superfluous and obvious answer has provoked a great debate. To give only two examples, a group of Austrian priests have made it clear that they will not obey, and many German priests have said the same thing, while an important Belgian bishop, Johan Bonny, has said that he is ashamed of the Church because of this sort of document, and he has apologized to all homosexual couples as well as to their parents and grandparents.

So far, the Holy See has not reacted to these signs of rebellion against the doctrine of the Catholic faith, while Bishop Eduardo Taussig [of San Rafael, Argentina] and many other bishops continue to sanction priests and the faithful for giving and receiving Communion on the tongue.  I do not know if we are aware of the situation of apostasy in which we find ourselves, or if it seems to us like everything is normal.

I will not repeat here the history of the document of the CDF and the subsequent advances and retreats that have been sufficiently documented elsewhere, but it is worthwhile to do some analysis.

The episode paints a complete picture of Bergoglio. His principle is: never sign anything that is against doctrine, but approve and encourage changes by means of gestures and printing operations. It is the old Jesuit and Peronist tactic. A friend has conveniently recalled the story The Great Tamerlane of Persia [editor’s note: in which the protagonist disguised himself as a merchant at night and visited the slums, while during the day he raged against the people in his palace]. Some Italian media have wondered if all this is a sign of Bergoglio’s psychological imbalance. In my opinion, it was a perfectly planned maneuver.

It is clear and uncontestable that the response of the Congregation for the Doctrine of the Faith was published with the express authorization of the Pontiff. The document itself says: “The Sovereign Pontiff Francis, at the Audience granted to the undersigned Secretary of this Congregation, was informed and gave his assent to the publication of the above-mentioned Responsum ad dubium, with the annexed Explanatory Note.” The typically Jesuitical explanations of Pino Piva [editor’s note: Father Pino Piva, S.J., “an expert in pastoral accompaniment paths with homosexual persons”] have no foundation.

A few days after the publication of the document and the subsequent fuss, the journalistic association formed by the couple Gerard O’Connell and Elisabetta Piqué, with related articles in the international media (American Magazine and La Nación) has informed us that according to confidential sources within Santa Marta, Pope Francis was very disturbed by the note from the CDF, as was supposedly demonstrated by the words he spoke in his Angelus address on March 21. The articles appeared immediately after the end of the prayer, which indicates that they had been prepared well in advance. Many have wondered who the “authoritative source” could be. I have no doubt that it is Bergoglio himself. He is a personal friend of the O’Connell – Piqué couple, and he has already used them on other occasions, including when he was archbishop of Buenos Aires, for his printing operations.

Bergoglio, for whatever reason, wants to change the practice of the Church with regard to persons with homosexual tendencies, not only by allowing their conduct but also by blessing them. He cannot or does not want to sign an official doctrinal change, which would be catastrophic for the already-fragile unity of the Church and would make him go down in history as a certified apostate. What he is doing, therefore, is attaining his objective with allusions and ambiguous speeches, so that everyone understands what he wants anyways through the international press that is aligned with him […]. Everything has been attentively planned by Francis.

As if the ambiguity of the words at the Angelus were not enough, on Tuesday, March 23, in a speech given on the anniversary of none other than Saint Alphonsus Maria de Liguori, Francis gave even clearer indications, even if this time the ambiguity passed by almost unnoticed. He said: “I invite moral theologians, missionaries and confessors to enter into a living relationship with the people of God, and to look at existence from their angle, to understand the real difficulties they encounter and to help heal wounds […]. Moral theology cannot reflect only on the formulation of principles, of rules, but needs to be proactive about the reality that exceeds any idea (cf. EG 231). This is a priority (cf. EG 34-39), since the mere knowledge of theoretical principles, as Saint Alphonsus himself reminds us, is not enough to accompany and sustain consciences in the discernment of the good that is to be done.”

Bergoglio, paraphrasing Perón, says: “Don’t look at what I sign, but at what I say.” After these words, with what authority can one reproach, for example, the Salesian priest who a few weeks ago publicly blessed a homosexual couple in Ushuaia, Argentina? He was simply a good pastor who knew how to look at reality and, distancing himself from theoretical principles, accompanied consciences and healed the wounded.

These events recall and confirm the intuition that Ludovicus had in the first months of the Bergoglian pontificate, coining the expression “institutional cannibalism.” Elisabetta Piqué wrote at La Nación: “Although today’s letter, like last Sunday’s Angelus, did not have any reference to the responsum of the CDF, a document that had the assent of the Holy Father, the message made clear the contrasting vision of Pope Francis and of the Church in terms of content and language.” I wonder how there can be a contrast between the vision of the Pope and of the Church. The message of the journalist – and this is the message Bergoglio wants to convey – is that the Pope is the good one and the Church is the bad one, which impedes the development of the good intentions and actions of the pope.

Finally, as was warned a few days ago, Francis is not, as many of us believed, the incarnation of Vatican II. That unfortunate assembly did not throw the stone so far. Francis is Vatican III.