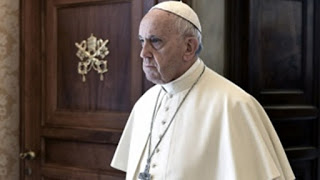 I greet you with great sadness and pain towards my Church because of the news I heard yesterday on social media where a man is seen shouting: “This is not the Church of God! No more masks in the Church! You are not a king!” In response to this situation you commented: “He is a brother in difficulty, we must pray for him.”

In the comments on that news item, many people wrote: “That man spoke the truth.”

I would like to remind you, Pope Francis, that during your visit to a convent in Greece, a respectable Orthodox priest also repeatedly shouted at you: “You are a heretic!”

The reason for my letter, Pope Francis, is to tell you that there are millions of Catholics in the world who think like those who shouted at you, and we are tired of the cynicism in your response because these people are saner than anyone else.

They know, among other things, that you have signed an agreement with other religious leaders to build a mosque in Abu Dhabi, a Catholic Church and a synagogue, with which they will be founding the new world religion that they plan to call, “The Abrahamic Family House.”  And there, on our church, a crucifix cannot be placed because there is a law that forbids the Cross on the outside of any building in the United Arab Emirates. It means that with your signature, Pope Francis, you have betrayed nothing less than Our Lord Jesus Christ Crucified, the sacred symbol of our Christianity.

We know that the ultimate intention is to destroy our Church with all its principles and to allow immorality. Already we hear voices like “A gay friendly Church” where same sex marriages can be celebrated.

Those who have shouted at you have every reason to do so because we already know that you are serving the interests of the devil with the countless actions and abuses you have committed to the point of having our church split in two and its members fighting among themselves.  That is not building with love. That is destroying with evil. You have gone as far as to have worshipped the pachamama inside the Vatican.

It is difficult for me to mention in this letter all the acts of heresy that you have committed, Pope Francis. We are also aware of the document world-renowned, eminent personalities sent you proving your heresies and asking for your resignation.

We know the horrible things you did in Argentina, especially with your priest friends Orlando Yorio and Francisco Jalics, and we know that this is the reason why you do not dare to return to your home country. We know what you are doing now to priests loyal to Christ.

On social media there are hundreds of people shouting at you, Pope Francis, and they are all good Catholics. They are outraged, including priests whose channels have been censored by bishops who toe your line. Yet every day there are more and more documentaries coming out of the Vatican, giving publicity to you. A good pope needs no publicity.

It is evident that you are trying to replace good with evil, Pope Francis, but we are not fools, we have opened our eyes, and true Christians who love and defend Christ know that the Church will prevail.

I pray for you, Pope Francis, that you may examine your conscience and realize all the evil you have done and are doing. You try to deceive us with your phrases while you do the opposite of what you say.

For example: you issued canonical sanctions for prelates who commit crimes of abuse, but in practice you not only protect them, but even promote them: [Gustavo] Zanchetta, [Theodore] McCarrick, [Robert] Bezak and a long list of others.

I know you very well, Pope Francis, because one day, while you were making the sign of the cross, you were lying to me, and you ended up betraying me.

It seems that you follow the same line of your closest advisor, Cardinal Oscar Andrés Rodríguez Maradiaga, who is in the habit of attacking with insults those who question him, given the impossibility of being able to defend himself with dignity and rectitude, with proof and with the truth.

Greetings for You from a Christian who first of all, loves Jesús Christ.

Author of the book Sacred Betrayals