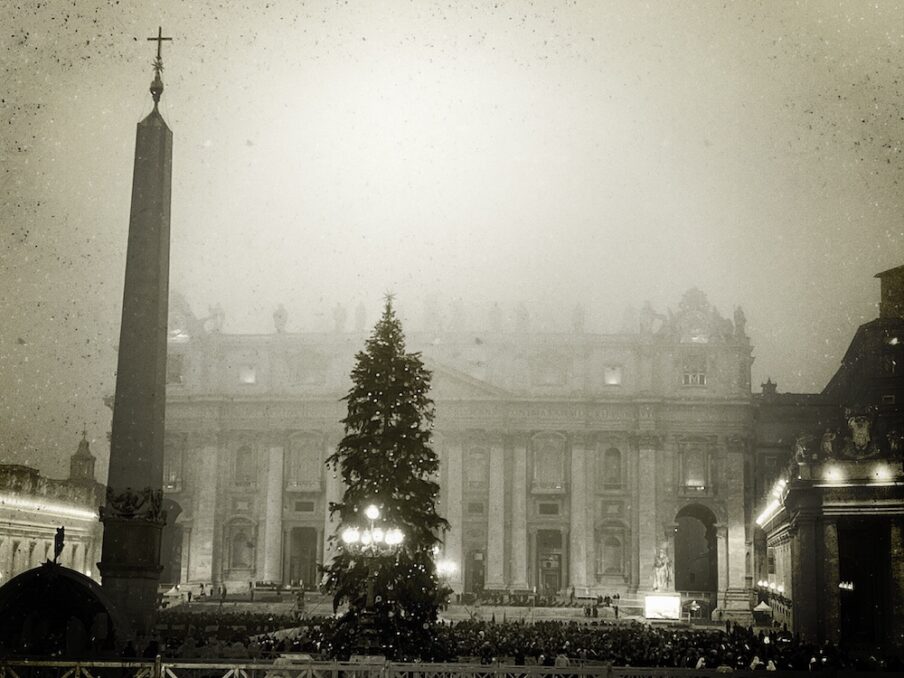 Letter / April 2005, January 2023. Memories and emotions. Between regret and hope

As I am writing you, I am sitting with a picture of Pope Benedict XVI.

Seated in profile with his hands joined, he is smiling with the expression that often accompanied his pontificate; the same expression that, although defined by the media as not very empathetic, touched and scrutinized the hearts of those who knew how to read a profound paternity in that gaze.

It has only been ten days since that funeral. And, like many people, I was there, in the thick fog that took the Eternal City by surprise.

Despite the fact that only a short time has passed, in my heart I still feel the need to process what we experienced: the disorientation of a liturgy that was perceived as “improvised,” confused, contaminated, and at times contradictory, the daughter of a Church that already decades ago began to manifest symptoms of amnesia, which was revealed with a disarming impudence on January 5.

It is a Church that, in my opinion, was manifested that day in Saint Peter’s Square by two “armies.” One army was characterized by those who were holding their smartphones in their hands, gripped by the anxiety of recording every single moment with videos, photos, live broadcasts on Facebook, videocalls with distant relatives who were still in their pajamas, Instagram stories and trendy selfies. The other army preferred, instead of the Babel that surrounded them, the silence of the priests dressed in cassocks and the Holy Rosary unsheathed and grasped by the faithful as their only weapon against the rampant chaos.

“What meaning do we give to the sacrifice of Christ? And, therefore, what sense can we give to the death of a man who, whatever else anyone may say, was a great Pope?”

These were some of the questions that crossed my mind while I was looking back and forth at these two worlds, and which immediately dusted off old memories that go back to April 2005.

I was only a teenager then. Heading out from my small provincial town with a few of my friends, we took the train from the station in Carsoli, eager to make a visit to the body of John Paul II.

I remember not only how hot it was that day and the endless crowd that dominated every corner of the Capital City, but also the simplicity with which, standing under the scorching sun waiting to get into Saint Peter’s, we joined the prayers that were intoned by the people close to us. Slowly, like a small mountain stream that expands its banks as it flows down into the valley, those prayers spread like a wildfire and filled the entire square. Furthermore, I cannot forget the sense of unity that was inscribed in our hearts and which we breathed in during our return trip home and for the next few months: a unity that was not polyhedric and multiform but rather true and solid, a unity that creates order and does not confuse because it bears only one face, the face of Christ and not the face of the world.

This black and white photograph made its way into me with a displeasure and a nostalgia that was even more tangible as I listened to Pope Francis’s homily.

In that moment I felt empty, liquid, rootless, disoriented, alone, and an orphan. It was as if the fog that shrouded the immense cupola of Saint Peter’s was not only the mirror of my heart, but also of the silent glances that my friends and I exchanged, hoping that everything would take a different, perhaps more solemn, turn.

Indeed, there was a ray of sunshine, but it was only a few hours later, when a dear friend, a priest who wears his cassock, called and invited us to lunch with him and two other priests at the Bavarian restaurant where Cardinal Ratzinger often went to eat.

What a balm to the heart it was to enter that place and see the clientele: at every table there were groups of young people and adults with at least three priests wearing cassocks, including also a bishop and a cardinal.

It was there that I finally breathed in the air of that “little flock” which, despite the suffering of the sad circumstances, was capable of transforming the interior disorientation and the thick fog of the morning into a welcoming hearth, where the hot food that arrived at the tables was blessed in Italian, Spanish, English, German, and Polish, pausing to remember the Beauty of life and death lived with Christ.

It is thanks to that moment of profound sharing of faith that my return to Verona was guided by a more mature awareness that the Church, even if it seems to have lost the tradition of the Fathers, is already re-starting from the simplicity of a silent, prayerful struggle: just as it did in France in the Vendee in the 18th century.

This awareness, both my own and that of many other Catholics, permits me to combine my memory of that distant April 2005 with a picture in vivid colors depicting a group of friends with their Rosaries in their pockets and three priests wearing cassocks, underneath which is written: “Rome, 5 January 2023. Thank you, Benedict XVI.”

This is the eternal Church, which the gates of hell shall not prevail against.

Dear Benedict, I know that now, either from Purgatory or Heaven, you are already interceding for this army of faithful people which is asking the Lord for the grace of a courageous faith, capable of fighting for the Truth, nunc et semper.